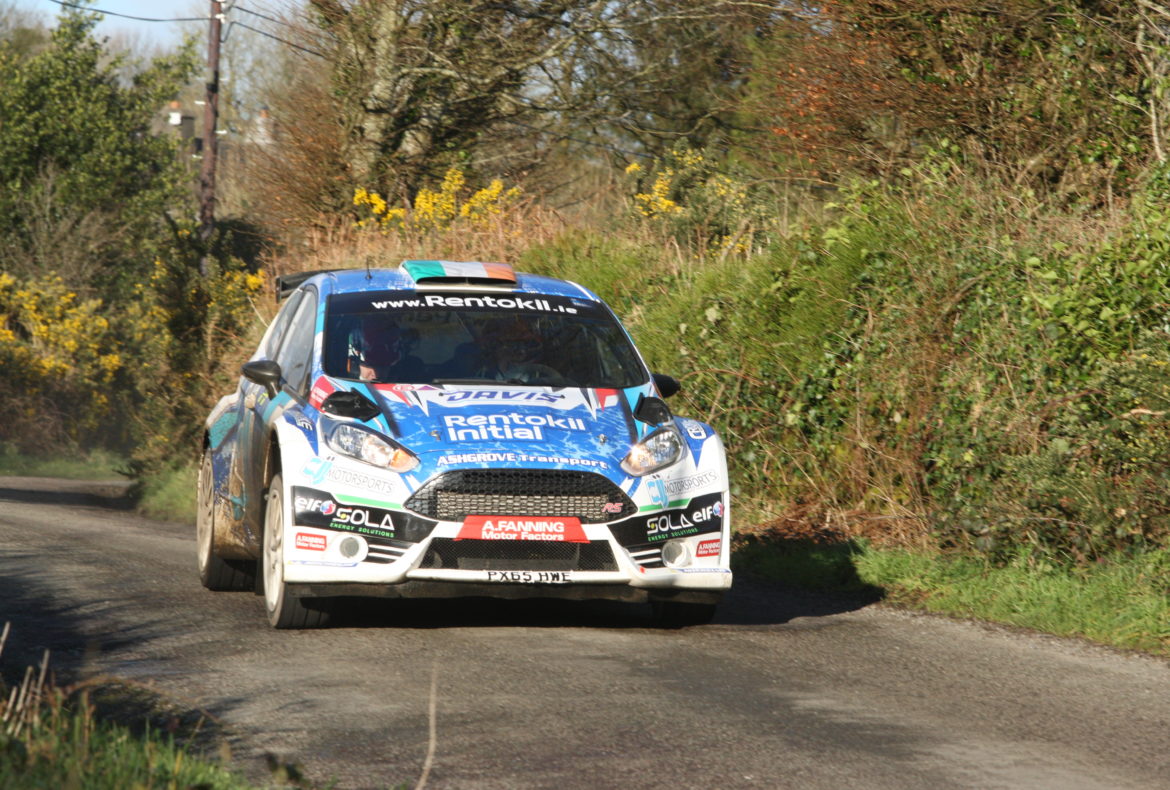 Craig Breen & Paul Nagle will be heading to the Wastewater Solutions Easter Stages Rally this weekend knowing that a third win on the bounce would leave them in a very strong Irish Tarmac Rally Championship position. With wins in Galway and West Cork the pair holds a six point advantage heading into the third round of the series and they will be strong favourites to make it a hat trick of wins. Alastair Fisher & Gordon Noble have been in excellent form this year, with Alastair pushing Breen very hard on both rounds to date and finishing less than thirty second behind each time. Fisher is long deserving of an outright win on a TROA round, and he will be doing his best to break that duck.

Josh Moffett won this event in 2018 but this year hasn’t run as smoothly to date. Third overall in Galway and seventh in West Cork after mechanical trouble has dented his challenge somewhat, but he still holds third overall in the championship. Jonny Greer has had a couple of steady results to hold fourth place with Tom Cave who is not competing on the Antrim based event. Sam Moffett & Callum Devine also bring their Fiestas to the party and both will feature in the overall shakeup if they get a good start.

It’s been a difficult start for Declan Boyle and Manus Kelly with both finding the change to R5 machinery a challenge. Boyle was hampered by electrical problems early in West Cork but set some very competitive times in the latter half of the event. Things have been even tougher for Manus Kelly as he adapts to LHD for the first time and it’s been a difficult spell for him but with more seat time in the Hyundai he will get closer to the pace. Desi Henry and Meirion Evans are two other registered R5 drivers who will be looking to add to their points tally after a disappointing West Cork. Martyn England also makes the trip over from the UK after retiring his Fiesta on the last round in Clonakilty.

The Group N category sees William Mavitty the champion of 2017 & 2018 up against Andy Davies from Wales who has been very impressive so far this season on his first attempts on Irish tarmac. Davies took top points in Galway with Mavitty doing likewise in Clonakilty. The battle for honours is sure to be interesting in Antrim this weekend. William Creighton currently leads the R2 class and will be strong favourite to make it three from three despite Eamonn Kelly and Johnnie Mulholland likely to be pushing hard. Creighton despite his tender years has a had a head start on his rivals and is very well used to the car and its limitation and has a lot of experience over the past couple of years.

The Modified championship leader Damian Toner is closer to home territory this weekend and will be well favoured to extend his lead as closest rivals David Condell and Damien Tourish are not competing. Conor McCrossan is currently fourth in the championship and he will see this as an opportunity to gain some ground. Gerard McQuaid, his namesake Hugh and JR McDaid are three other registered drivers who can take full advantage, should Toner make any mistakes. The Historic and Junior categories are poorly represented with Andy Johnson, Ernie Graham, Craig MacWilliam and Adrian Kermode the most notable while Conor Murphy is the sole junior championship contender looking to get his first points of the season.

The first six stages take place on Good Friday the 19th April and the action begins with the Buckna stage at 10:41am. Saturday will see six more stages with the first car due back at the finish at approximately 4:30pm at the Ulster Grand Prix Pits.