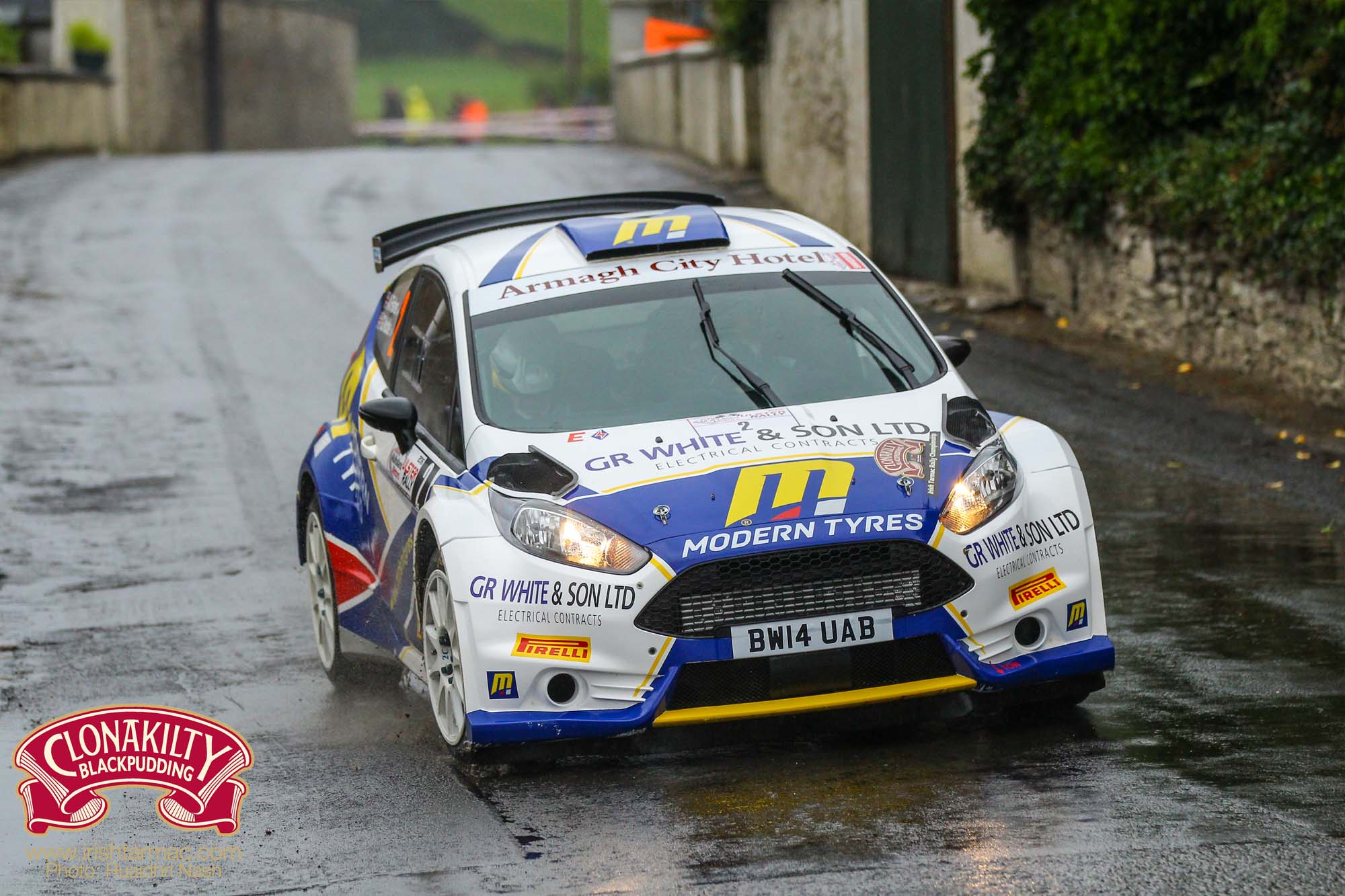 In keeping with the season overall, the sixth round of the Clonakilty Blackpudding Irish Tarmac Championship didn’t disappoint with drama aplenty over the weekend. The John Mulholland Motors Ulster Rally witnessed some great battles and extraordinary commitment as the pendulum swung several times over the weekend with Alastair Fisher eventually coming out on top. Second place overall behind rally winner Elfyn Evans was enough to give the Fermanagh driver maximum points and the lead of the tarmac championship with one round remaining in Cork. He had led the event early on only to suffer a puncture and then a spin which dropped him back to fifth and it looked like a difficult task to make back the time.

However Keith Cronin who had moved into a solid second place and who was looking very comfortable with just three stages remaining suffered gearbox problems in his Citroen and the resultant time penalties dropped him back to sixth. He was able to gain back one place to fifth and took third place points, but it now means he will need to finish ahead of Fisher in Cork to take the title. Jonny Greer had an outstanding drive to take third overall in his Citroen which moves him up to sixth overall in the series in what was his best performance of the season.

For others things didn’t go as smoothly with Josh Moffett having to be content with seventh overall after a lucky escape on the opening day when he clipped a wall. He also dropped some time on the final few stages with exhaust problems but still moves into third overall in the series. Sam Moffett (broken front suspension), Stephen Wright (throttle), Desi Henry (power steering) and Aaron McHale (accident) were among those forced to retire from the event as the slippery and tough stages took their toll.

David Guest & Paddy Robinson wrapped up the Group N title with another win to make it five maximum scores from five rounds completed to date in their Mitsubishi Lancer. Callum Devine took the FWD honours from Marty Gallagher which strengthens his position heading to the final round in Cork while William Creighton took third place points.

The Modified Championship is also still up for grabs with one rounds remaining. John Bonner took maximum points in Ulster to move into fourth overall and has an outside chance of overall honours while second place points in Ulster moves Scotlands Ross Marshall into the lead of the series as Davy Armstrong had scored in all previous rounds and has had to drop his lowest score. The gap between the pair is now four points, it could have been closer but a road penalty dropped Armstrong behind Marshall and he was only 19 seconds behind at the end. John O’Sullivan was fourth registered driver in his Fiesta R2 and last years Junior champion is now up to third overall in the series. Wesley Patterson retired at the end of the first day while Eugene Meegan who had been top registered driver overnight retired on the opening stage of the second day.

Andy Johnson took top points in the Historic Rally in his Chevette HSR which moves him into second place in the series, but still 28 points behind the leader Frank Cunningham. Cunningham brought his Escort home in second place to extend his lead even further with two rounds to go. Brendan McAree moves into third place after picking up points for fourth place while David Goose who didn’t compete on the Ulster Rally dropped to fourth in the standings. Other drivers who scored well included Richard Hall, Dessie Nutt, Niall Creighton and Philip McKibbin. The final two rounds take place on the Isle of Man in September and Cork 20 in October.

With the top pair of Justin Ryan and Noel Murphy not competing on the Ulster Rally, the opportunity arose for third placed Kevin Horgan to score full points and move into contention. The Cork driver duly did as required and the final round in Cork will now see the title decided between these three drivers. Horgan now moves into the lead alongside Ryan and will fancy his chances in Cork, but nothing can be taken for granted in rallying. As with the overall the championship, the Junior Rally will be a winner takes all scenario.

Looking forward to seeing how this goes in Galway next weekend 😎

The new Citroen Racing C3 Rally2 will makes its debut in Ireland next month as 2021 @NIRally champion @JonnyG_Rally tackles the @IrishTarmacTROA opening @GalwayIntRally in his new arrival.

It's time to go rallying!

The race to our Rally4 title has an extra incentive this year as @msportpoland offers a drive on ERC's Barum Czech Rally Zlin!

Full details plus a runner-up prize on our website ⤵️

He's more than welcome to join the party ☘️🕺🏼

@AaronJ_CoDriver with matching collar and cuffs! 😂. All ready for #StPatricksDay........maybe planning a trip to #Clonakilty @westcorkrally? There is a downtime slot in the #WRC schedule.

.@MERallysport has @IrishTarmacTROA ambitions but faces a fight against time to secure backing for @GalwayIntRally.

He explains why he wants to go to Ireland, what he needs to make it happen, and what he can offer partners.